A great meeting of minds. 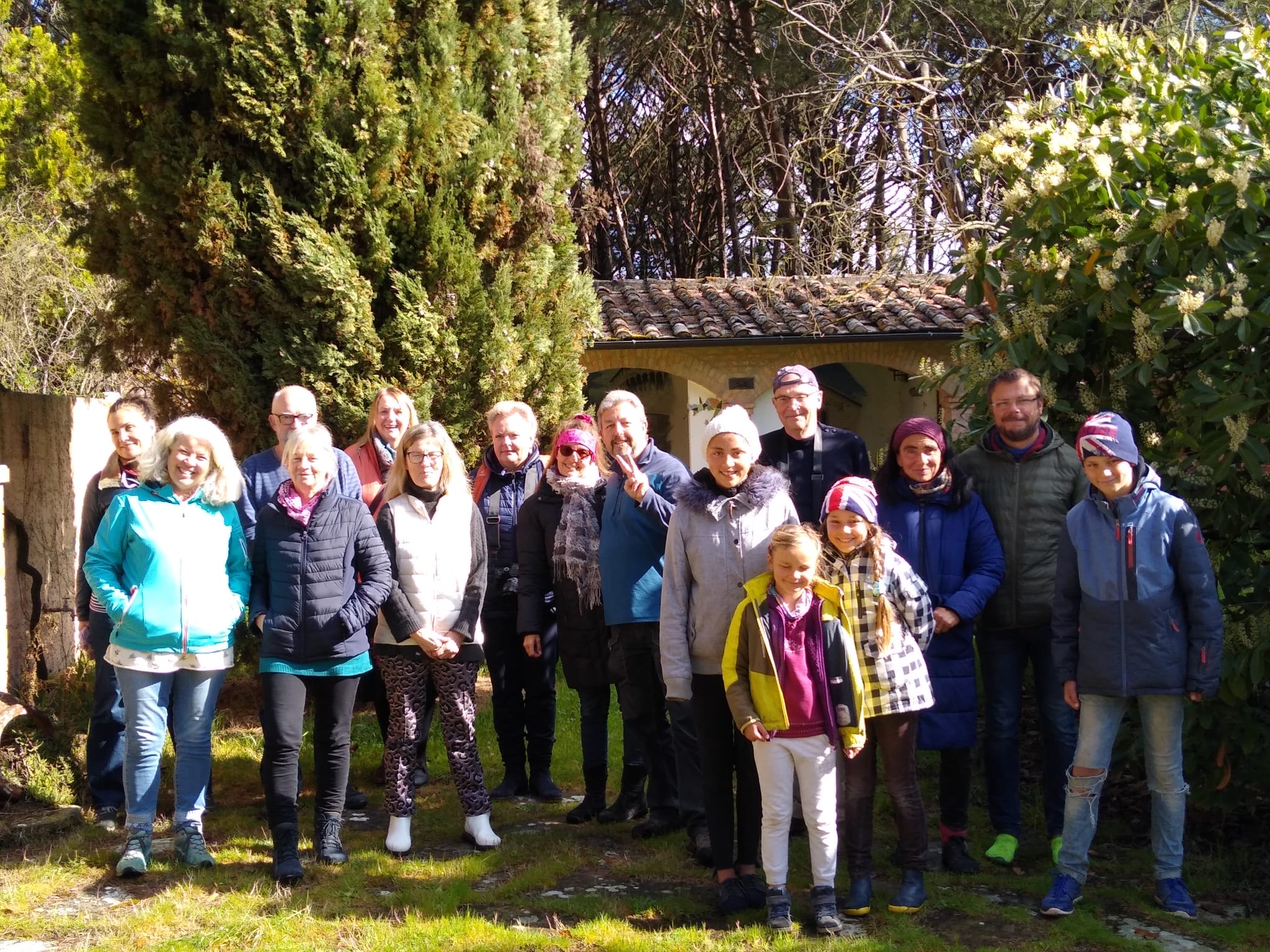 So we have finally waved goodbye to the wonderful people who came down from Germany and Austria to meet Manuela and I and obviously, each other. One lady who came all the way from the very north of Germany has now arrived safely home after a complete day of travel, so well done Reinhild… And of course a huge thank you to each and every one else who made our first meeting a great success, especially our host Simona.

Share-It as an idea is to bring people together and share the friendships and the cooperation and the fun and the laughter, as well as the task of finding a suitable property to house all of the great folk that desire to live in community with us. During the recent meeting we managed to view 4 separate and very different properties together. This has given Manuela and I much information to think about as we try and find a consensus as to which, if any of these, might be the place to start from. Because of a range of ages attending the gathering, we now know that we need predominantly flat land, individual apartments and several social/communal spaces and rooms. Added to that gardens and grounds for the self-sufficiency aspects of our Permaculture aims, and for the relaxing in nature and quiet spaces we all crave.

Another suggestion is for other space for the possibility to construct alternative dwellings, such as a Yurt and timber/log cabin. The latter may depend on several factors, predominantly the planning regulations. However, we have seen a way to potentially build small dwellings, if the land owned is large enough to cope with that. If the dwellings are not served directly with ‘normal’ services such as electricity and water/sewage it is more likely to be agreed by the local Commune authority. One of the properties for example was over 10ha and about 1/3 of this was forest and had something in the region of 15 separate living accommodations already. Though a renovation of almost the entire structure in smaller or larger parts is in my humble opinion needed, we both found this to be currently the main contender with the financial commitments that we have received from the group that came.

During almost five months of constant viewing of properties up and down central Italy, we have yet to find a better value for money option. The resources offered, growing land and forest, access to water from wells and streams and a lake, as well as mains water supply. Space for expansion across the 10ha+ was in our view ideal for the community ventures and a swimming pool for relaxation throughout the summer and autumn, besides shady ancient trees and a large park. A possibility for having animals, such as donkeys, sheep and horses, or goats and chickens was also possible here.

We had organised our gathering at an agri-tourism near to Lake Trasimeno for the group which proved to be a great idea. It was very central for the viewing schedule we had organised, and was served by such wonderful people that cared for our every need. On the second evening we had arranged a group meal that was beautifully prepared for by the husband of the host, Federico. Anti pastis and spaghetti and a wonderful Panacotta for desert, with wine…. Lots of local wine… On other evenings we cooked as smaller groups and served the group as a whole, which was in itself a great team building exercise, and the food was fantastic quality I do have to say….

At this first meal, Manuela and I had prepared a short presentation for the group, mainly to formerly invite everyone to join the Share-It Community, if they felt it had the possibility of becoming something they wanted to be engaged with, and if they also could see themselves investing in becoming a member. I faltered a little with my German but Manuela was happy to translate to avoid any faux-pas… By the time people were leaving at the end of almost a whole week here, we felt very lucky to have met such wonderful and capable individuals who could also believe in the possibility to live in a Co-housing Community with us. We feel as though we have made some very great friends and predominantly new Share-It family members. Thank you all.

Now comes the slightly harder work of reflecting on what and which aspects are the most important to consider in a choice of property. Obviously the choice is not simply ours but the group who will form the founding members of the Share-It Community. BUT Manuela and I also recognise that many hurdles still need to be overcome on the way to the dream being realised. As the people who came here will now understand, money is not our driver, nor is the property alone the most important factor, but the people who will be involved. This is where community is founded, in the unbreakable bonds of love and friendship. One of the initial hurdles will obviously be to collate enough financial input from investors to buy an actual property. Manuela has done hundreds of hours of work on the financial models and the costings and all of the relevant project resource gathering so we are already many miles ahead of where we could have been. I am focussed now on making determined efforts to get actual quotes and services ready for whichever property we eventually decide to buy, based on realising we will inevitably need adaptation or renovations for the community needs.

So once again our heartfelt thanks to all those attending and anyone reading this blog and wishing to be involved, please send us your questions and enquiries and we will be happy to respond as soon as we can. Keep checking in for more developments over the coming weeks.